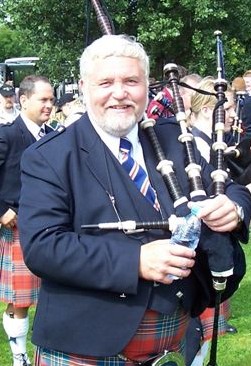 John was born in Bradford England. He graduated from Bradford Technical College - Radio and Television Engineering and emigrated to Canada in 1980. John worked in Mechanical and Electronic design in Toronto, Ontario. Antigonish Nova Scotia became our home in 1993 where John began teaching piping in the Atlantic Region. John designed the Shuttle Pipes and began marketing them through John Walsh Bagpipes in 1994.

John Walsh Bagpipes as a business has changed and diversified over the past 25 years. We are back to being a home based operation now and enjoying the change immensely.

Tom MacMillan has been with us 23 years now.

JWB manufactures: Shuttle Pipes, Scottish Small Pipes, Retro Pipes, Practice Chanters, Practice chanter reeds, various bagpipe accessories and not to forget the Great Highland Bagpipes as well. Our products are hand crafted as we do not have CNC lathes. We are now using Eco-Friendly Hardwoods instead of African Blackwood due to CITES restrictions on African Blackwood.

Much time and care is taken in the production as well as assembly to ensure the quality and sound of our products is of the highest standard.

On a personal note John started piping at the age of 13. He has several solo piping awards to his credit and has played with top Grade pipe bands. He has been a band winner of the Grade 1 World’s Pipe Band Championship twice ( 1987 and 2005). Jean, John's wife is also a piper, and has worked with John in the business since its inception on the early 90’s.